God displayed in His mighty creation 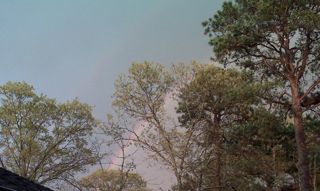 double rainbow at my house spring 2010

(background so you can understand the story. We live in a small town with a major road called Jackson - speed limit, 50 -everyone takes it at 55mph. Our street intersects Jackson just a few hundred feet from our house. Neighbors name is Mike - lives across the street. One street over is another neighbor Sue.)

It's my day off so I was sleeping in. At 7:30am my mom says Mike called, goats are out on the street! I do my best not to trip and fall out of bed. Grab my coat and slip on my shoes. Still with cobwebs in my eyes and run out to their barn (have to check to see for sure they are gone). Get near by call "Babies" then head towards the street. Before I make it even to the side of the house here comes the whole herd running at full speed. Poor things were shaking and trembling butting each other and I could just tell pretty upset. I open the gate and let them back into their pen. Seems the wind blew their gate open after the latch was rattled loose. The dog pen gate was open and they just took a wonder around. I yell to my mom that they are all here now and to call Mike and thank him.

Get back inside after all goats are fed and calm again (they calmed down pretty fast I was surprised) and seem no worse for their travels.I come back inside and mom says - "mike said sue on Ileen saw them near Jackson road, she knew they were our goats so she called mike and he called us. Near Jackson road!!!! thats extremely dangerous! Called mike back to thank him personally and he said that when Sue called him the goats had made it back down our street and were stopping at his house looking confused. And about then I called them and he was like "it was really cool, they just turned and ran for your voice" I thanked him again and asked him to pass that onto Sue (who I know through our neighbors) and then thanked the Lord over and over before snuggling back into bed for another hour or so of sleep. Will keep an eye on them for stress - but they seem to be fine. Crazy goats
Posted by Country at Heart at 11:15 AM

End of The Line

Promote Your Page Too